The AVHS Forensics program has a big weekend with its debate team competing for a trip to nationals and the speech team traveling to Des Moines for a weekend tournament.  Both events turned out to be quite successful.

In debate, AVHS has three student who qualified for the 2016 NSDA Grand National Tournament in Salt Lake City, Utah.  These students include seniors Sophia Ober and Claire Hoffa (who will be making her third trip to nationals, and junior John Boals.

In speech, AVHS won the sweepstakes of the Dowling Paradigm in Des Moines Iowa.  Twenty-three students attended, of which seventeen of them advanced to semi finals, twelve to finals and four were named champion.  See detailed results below. 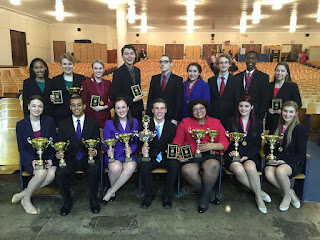